One spring, I worked with an editor who wanted to shape a new career path. She approached me for coaching having read my CV writing book, seeking my help her with job applications and showreel.

At the time she was stuck working for a news channel with whom she felt she had little chance for career progression. She wanted to move from her current staff job to another, but wasn’t see many jobs advertised and of those she was applying for, she wasn’t getting shortlisted.

Then, a year after our sessions ended, I saw and liked her LinkedIn post of an animation she’d recently worked on as a freelancer! A few minutes later I received an email from her:

Finally, I made it! I embraced the freelance world and I must say it is going better and better. I still remember our precious coaching meetings and all the invaluable advice you gave me. Now everything is paying back.

I am now developing my skills into the motion graphics field and I love it!

This was so lovely to hear. She’d moved her career on, sounding enthusiastic and excited. She had taken action, and was seeing the benefits. 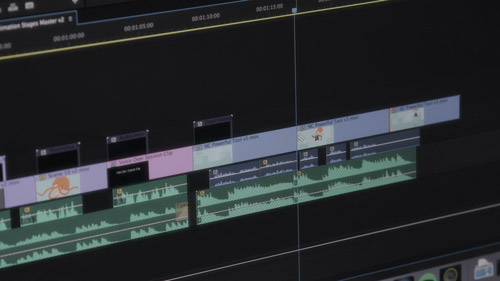 So what steps did she take?

The Editor and I did six sessions together, which spanned around 8 months. There was usually 3 weeks between session, but there was a longer break over Christmas. I used a combination of mentoring and coaching. The difference between the two is that with mentoring, I offer direct tips and experience. However we spent plenty of time coaching, where I helped her discover her own answers to her challenges, and encouraged her to reflect on what was going to make her happier and more successful in her career

As she’s already read through my book, her CV was in good shape, but I reviewed it with her, giving some more advice. We looked though her showreels, and I gave my opinion on how she could improve them. If you’d like to find out how you can improve your showreel, there are lessons on that.

As for the coaching we did, we started by using the Freelancer Mission Statement exercise to really identify what she wanted to become. She knew she wanted to improve graphic and animation skills, so that she could become a more rounded content creator.

We rated her skills on a 0 – 10 scale in one of the first sessions, and came back to these scores as she became more confident. We also set goals for the number of jobs she applied for, networking events, coffees with old colleagues. And at each session, I helped her plan what she was going to achieve over the next three months, and also the weeks until the next session. All of this helped her become much more action orientated.

Change does not happen quickly

By the time we finished our sessions, she was still in the same job, but the key for me, though, is that she had made the first steps towards changing how she thought about herself. This lead to her changing to her day-to-day working life, inspiring her to take actions to move on, which impacts her personal life.

This is what coaching is about for me. Setting a new career path and then working towards it. It doesn’t happen instantly, sometimes it can be months after the session that something falls in place. I’m just glad our work together created change for her!

Another year went by and our paths crossed again on LinkedIn, and she’s now working for a major production house as a full time animator. So it took her two years, but she’s in exactly the place she wrote in her Freelance Mission Statement in our first session!

If you’d like one-to-one sessions with me as a coach, get in touch.