How to sell yourself as a cameraman tip #2

I would like to add a disclaimer here: I prefer the term cameraperson, since it is gender neutral. However, in this case it’s male cameraperson I’m discussing, and keyword research shows me that cameraman is a more searched for term. Hence I’ve used the word cameraman throughout.

So, further to Tip #1, another improvement in Ivan’s CV (he’s a great cameraman in London) was the way he expressed his experience.

In the first draft he sent me for example, he described one job as “Lighting and camera for two car reviews for the Auto trader website.” This really didn’t tell me much. I know from filming car promo shoots myself that cars are complicated beasts to film. Their bonnets and windscreens are basically big, shiny mirrors, so lighting them is a pain, especially as you’re also trying not to get kit reflected in the shot too.

So I suggested he wrote much more detail about the way he filmed the material. In the next draft of his CV, he wrote:

“We filmed the presenter talking about the car and it’s features, both while the car was stationary and driving. We also had to do moving shots, which involved riggings cameras to the car. They also wanted beauty shots of the vehicle, which involved using both tracks and sliders. ”

This communicates much more about his knowledge and experience as a camera person. It made me see him at work, the complexity of what he had shot. 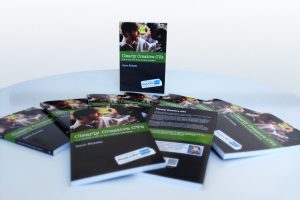 Make your CV work harder and win more work with my book on writing a CV for television. Clearly Creative CVs is available on Amazon.